The very first article in this blog was about how Google Analytics does not do user level reporting and how it doesn’t make sense anyway. Promptly Google tries to make me look foolish by releasing the new user explorer, a report that allows user level reporting.

As per the release notes:

A new set of reports in Google Analytics lets you perform analysis of anonymized individual interactions with your websites and apps. User Explorer utilizes existing anonymous Google Analytics data to deliver incremental insights that marketers need to improve and optimize their sites and apps. The feature is now available in the Audience sections. Anonymous Client ID and User ID will be surfaced in this report as a part of the release.

So this is more or less a click stream for individual client ids.

You might not be terribly surprised that I am not yet sold on that report, largely for reasons outlined in my original blog post.

For one this looks like Google is deliberately thumbing their nose at the European Union at large and Germany in particular by introducing that kind of granularity amidst more and more privacy concerns. Now you might think we Germans are overly hysterical over privacy (and to some extent you even might be right) but we are still one of the largest economies in the world with a lot of power to thumb back, so I would at least have expected a way to disable user level reporting (much like you can anonymize user’s IP addresses before they are stored on the Google servers, or disable demographics reports).

The other reason I dislike this report is that it is not actionable. When I have thousands, or hundreds of thousands or millions of visitors on a website there is no way I could look at them individually (and if my visitors are so few in number that I can look at them individually I have a problem that the report cannot solve), and even if I want to find outliers for some metric I can do that much easier and more effective via segmentation (and I am a big fan of that). Plus as far as webtracking is concerned this is saddled with all the shortcomings of a javascript based, cookie reliant trend monitoring tool in a world with multiple devices and configurable privacy settings.

Apparently “those who have had access to the tool [were] calling it stunning, albeit long-awaited or overdue in the eyes of those paying for third-party tools“. As far as I can tell nobody had anything to say on how to use the thing.

The other new thing is, alas, available only in Google Analytics Premium (and still in beta), and it’s custom funnel reports. This is not the sad thing from the goal funnel visualizations with their many shortcomings (like backfilling / pageviews that do occur in sequence, or the “required step” that applies only to the visualization, not the conversion itself). The custom funnel report has more goodies than can reasonably described in a blog post, so a screenshot will have to do: 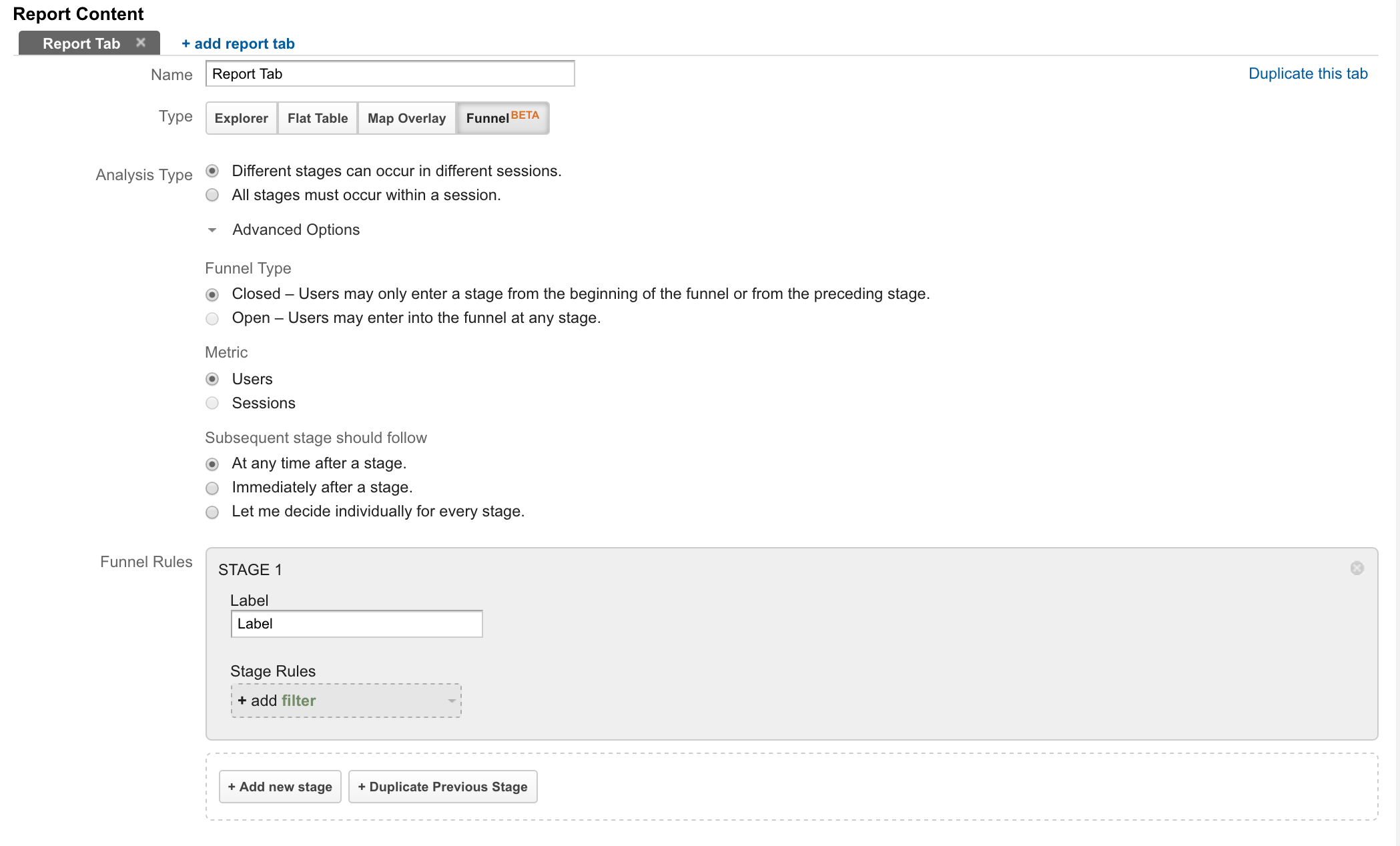 As you can see funnels can be tracked within a session or across sessions, they can be “open” (users can enter at any step) or “closed” (users have to go through all steps). Funnel rules can be page paths as well as other dimensions (start a funnel only for Adwords users who used the site search after triggering a certain event before converting, that kind of thing). I think the use of funnels is somewhat limited, but a properly working funnel is great if you want to examine attrition rates (how many users jump of at which point in a preset sequence of steps) and you can use that to find bottlenecks in checkout flows and the like, so it’s a bit of a pity this is limited to Premium.

Find me on Stackexchange